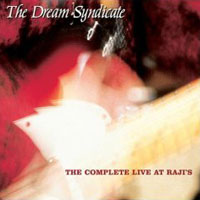 Temporarily out of stock!

This live record was released after the band had split up, and recorded before their last album Ghost Stories was recorded.

It features the final lineup of the Dream Syndicate: Steve Wynn, Paul B. Cutler, Mark Walton and Dennis Duck.

Reissued on April 26, 2004 containing the complete Raji's show (that is the 4 missing songs).