The Decade box chronicles the ten-year period after I moved to New York City in the mid-nineties. It's the decade where I caught air, to use a sports metaphor. I wrote more songs, made more albums and toured more than any period before or since. Maybe it was the excitement and energy of living in a new city--I'd always been in love with Manhattan and it was a "pinch me" period where I couldn't believe I was finally living here. I went out constantly, fully embraced the city and nightlife and sights and sounds and that excitement came out in the music. It was that thing that writers always dream about, that state where you can barely keep up with all the ideas you're having. I didn't have time for writer's block. I was just a stenographer to the muse that wouldn't leave me alone or let me slow down.

Recently I came across a box of cassettes, DATs and reels of tapes from that period and went to my friend Steve Rosenthal who used to own the Magic Shop studio in the city. He has been focusing his attention on archives like mine and had actually just finished doing a similar thing for Laurie Anderson and the tapes that Lou Reed had left behind. Steve painstakingly transferred everything I'd found and I was surprised how many demos and songs I had forgotten about. He ended up transferring and cataloguing about 100 hours of tape.

Pat Thomas and I had worked together over the years on reissues and special projects and collections of my material. He knows more about my history and has always been free with his opinions of what he likes and what he doesn't like--aided by the fact that he's done plenty of great reissues and is also a musician and recording artists and has released plenty of great records himself as a solo artist and as the leader of the band Mushroom.

He felt that documenting this entire period--released material, outtakes, bonus tracks and also these embryonic sketches--would make an interesting portrait of not only my career and a really fertile period but also a look at the creative process in progress, the road from raw idea to band interpretation to the final, fully realized state.

Pat and I got together at the Sportsman's Lodge motel in Burbank for a multi-day listening session and went through the entire archives with plenty of coffee and snacks and had a two-man version of the Gong Show with my history. A track would come on and we'd (okay, mostly Pat) would say "That's great!" or "Dump it!" We sifted down to the best stuff, the tracks that told the story and ended up with enough for an 11-CD box set.

This is the most extensive and focused collection of my music anyone's ever released and I'm proud and also grateful to Real Gone Music for allowing me to tell the story of a particularly prolific period in my life and the creative process in such a lovely, deluxe package. I hope everyone digs it. 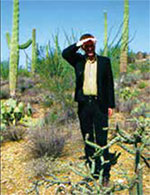 Coming October 23 is an 11-CD box set (cheekily entitled Decade) featuring 166 tracks, 57 UNRELEASED! Features lavishly deluxe editions of the guitar-driven albums that Steve cut from 1985-1995, most of which have been out of print for quite some time: Melting in the Dark, Sweetness and Light, My Midnight, Here Come the Miracles, Static Transmission, and ...Tick...Tick...Tick, plus the German-only comp The Emusic Singles Collection, plus all the tracks from the Europe-only rarities comp Pick of the Litter. Compiled by Steve and long-time archivist Pat Thomas, the set includes a 48-page book in which Steve personally recollects about each and every unreleased track, with plenty of unseen photos. Everything's been remastered, too, by Mike Milchner at Sonic Vision Mastering

Steve Wynn first gained fame as lead singer and songwriter for the legendary Paisley Underground outfit The Dream Syndicate. But his post-Dream Syndicate solo career is the equal of any indie-rock singer-songwriter you'd care to name. Now, Real Gone Music and Steve Wynn have joined forces to release Decade (yup, the Neil Young reference is deliberate), an 11-CD set that chronicles, with lavish deluxe editions, the guitar-driven albums Wynn recorded between 1995 and 2005, most of which have been long out-of-print.

The statistics on this box set are mind-blowing: 166 tracks, 57 of them totally unreleased, plus 31 other rarities! That's right...over half of this 11-CD set consists of either hitherto unknown recordings or tracks that have been almost impossible to find! As for the other tracks, they hail from the following albums: the American releases Melting In The Dark, Sweetness and Light, My Midnight, Here Come The Miracles, Static Transmission, and ...Tick...Tick...Tick, and the German-only compilation entitled The Emusic Singles Collection (rare tracks from another European-only release, a collection of rarities entitled Pick of the Litter, appear here as well).

So where do all the unreleased tracks come from? Well, during this 10-year period, Steve Wynn recorded dozens of songs -- sometimes at home and occasionally in a proper studio. Many of those songs got re-recorded and revamped and became key memorable parts of his catalog. Other songs got tossed away and forgotten.

For Decade, long-time Steve Wynn (and Dream Syndicate) archivist Pat Thomas in cooperation with Steve Wynn listened to about a hundred hours of unreleased tapes and compiled this amazing box set that not only includes remastered (by Mike Milchner of SonicVision) versions of some of Steve Wynn's best albums but also the first American release of the two rare European only titles. And -- it bears saying again -- 57 previously unreleased recordings that not even hardcore tape traders have heard! And 31 other rarities that only the most devoted fan could possibly have.

With so much material, you need a program...and so Steve Wynn himself has penned very detailed notes that tell the stories behind the origins of all 57 previously unreleased songs! Plus essays from box set producer Pat Thomas and several of Wynn's long time bandmates. And a pile of previously unseen photos from Linda Pitmon's archives -- most of them taken by Linda herself. All inside a mammoth, full-color, 48-page book!

A Decade of Steve Wynn. You need this. It won't stay in print forever. Maybe not even a decade.